In Loving Memory of Gunnar

On Thursday evening, February 13th, our sweet therapy dog, Gunnar, passed on. He had a rapid decline in the 24 hours prior and we chose to have him exit this world surrounded by family in our home. He went peacefully. Many of my clients have known Gunnar for years, and he has offered his unconditional love to all who passed through the office. I will cherish the knowledge that he had such a large circle of loved ones. He truly loved his job, and though he got sleepier in his old age, he perked up the moment he saw me getting ready for work. It was where he loved to be, and I wholeheartedly believe that it’s what kept him alive these last few years. I adopted Gunnar as a puppy from the Mission Viejo Animal Shelter almost twelve years ago. He was discovered in a litter of 10 puppies who were nursing with their mother under the shade of a tractor in Merced. I got to visit the litter for the first time on a hot summer day in 2008. Gunnar, the fattest of them all, was passed out in the water dish. I had no idea at the time how his mellow temperament would serve him in his role as a working dog.

We began training together when he was just ten weeks old, while he still looked like a teddy bear on a leash. He was always a really good boy, and he loved to learn. I remember how his wise brown eyes would stare into mine, waiting for the next command, studying my face for information. Nothing made him happier than to learn something new and to be praised and cuddled.

He was a mama’s boy from the start. Obsessed, really. His only destructive tendencies were when he ate the armpits out of my shirts and the inner soles out of my shoes. He would lay on the floor with his arms splayed out like a seal, gazing at me for hours while I typed my dissertation. He hated walks, but he hated being separated from me more, so he’d slog along for a short while, then lead me back in the direction of our home when he judged enough time had passed for us to return for a lazy cuddle. Gunnar’s first working experience was assisting a boy named Juan, who lived with us for a year. Juan had traveled from the Andes of Peru to receive reconstructive burn care at Shriners Children’s Hospital in Los Angeles, and Gunnar faithfully watched over him, easing his recovery and homesickness.

In 2010, when Gunnar was two-years-old, he relocated with me to Honolulu to begin my doctoral internship at Tripler Army Medical Hospital. He endured 13- to 14-hour days alone while I completed my training that year. I used to come home after dark, wrought with guilt for having left him alone all day. It was a bleak change from our joyful life in California, where he had the company of my ex-husband and our dog-loving friends. But for all the guilt I felt, he always just seemed happy to see me.

Finally that year came to pass and Gunnar and I embarked on our new journey together, preparing for the AKC Canine Good Citizen test and the National Alliance of Therapy Dogs certification exams. In the afternoons we would drive up to the military base at the top of Haleiwa Heights Road so that we could practice new commands on the open field. Just as he did when he was a puppy, my boy would stare at me with those big brown eyes, eager for the next skill to master. In 2011, He was certified as a therapy dog, permitting him to work with patients in hospitals and other treatment facilities. I started my two-year residency at Hawaii State Psychiatric Hospital, and Gunnar simultaneously became a member of the hospital’s therapy dog program. In between his visits with patients, we would hang out in my office together, him laying on my lap while I typed reports. In the following years, Gunnar joined me in offering animal-assisted therapy services through the Wounded Warriors Program and in my private practice located near Schofield Barracks. He had an ability to attend to service members during dissociative trauma episodes that I could never have trained him for, yet he seemed to intuit those crucial moments. He would cross the room to lean against a service member’s shaking legs, as if he understood the need to remind them that they were with us, safe in the confines of the therapy room, and no longer at war. He has kept so many people in his circle, and this fall he was even paid a visit by one of the first service members he worked with, seven years after they first met. 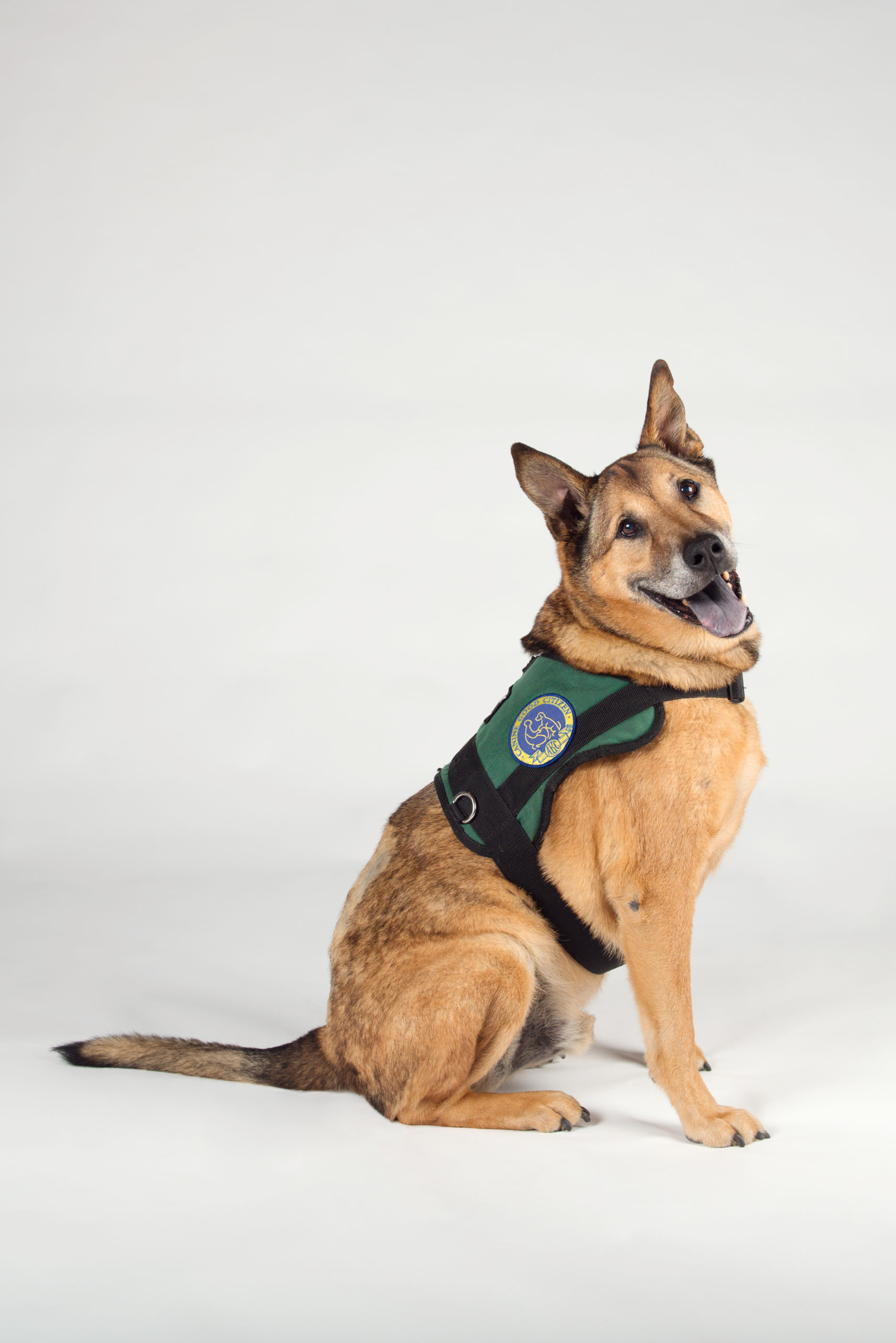 Gunnar loved his job. I believe it is what he was meant to do, and I have not known myself as a practicing psychologist without his part in the story. Since his passing, I have longed for our morning routine, for the way he stood eagerly in my bedroom doorway, watching with anticipation as I selected my shoes for the day. Once he confirmed that I had put on what he recognized as “work shoes,” he would do an excited hop-turn toward the door and off we would go.

With the exception of my internship year, Gunnar and I have hardly been separated for more than a few hours. I love him so very much. The grief I feel since his death has been a process of expansion and contraction. During the contractive moments, the pain can feel unbearable. On the first night after he was taken away, I wailed for him, holding my arms out and languishing at the emptiness with which I was met in return. Since that horrific night, the pattern of contraction-expansion has repeated itself enough times that I cannot deny the truths of my training—that if I can lean into the contraction, the pain eventually relents. After each contraction, there is a brief period of expansion, when I feel myself settling into the new normal of my life. And so I’ve surrendered to this brutal process.

By surrendering, this experience of grief has been different than in times past. It hasn’t been lessened. There’s no way to escape it. However, it has been cleaner. Simpler. I haven’t added layers of suffering that were unnecessary. I have simply allowed myself to feel the suffering that is already there, to recognize that relief eventually comes after each wave—if even briefly—and to grow braver.

This commitment to being with whatever comes has made me acknowledge my body’s response to the loss, notably the immense fatigue I’ve experienced that has me falling asleep upright with a trail of wadded tissues along the front of my sweatshirt. I have had to accept the support of friends, perhaps more than I might have in the past if I had attempted to escape my grief by thinking, isolating, or becoming immersed in work. I’m not sure if I have ever allowed myself to be so touched by the kindness of others, and I can feel myself connecting with something important, something simple, something beautiful and pure that I have denied for a long time through the distractions of work and endless to-do’s.

Grief is the ultimate meditation. My newfound attention to the moment has caused me to recognize that my grief and gratitude are often mixed at the same time. It’s awful and beautiful. One thing I will say, is that compared to times past when I’ve tried to escape or avoid grief, by leaning in, I’ve experienced much more hope for love to come.

I love you sweet Gunny. Thank you for continuing to make me better.

Rest in Peace, my sweet boy.